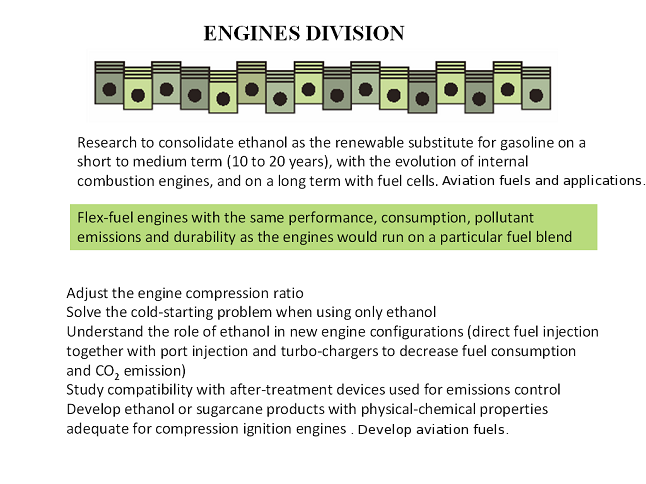 Ethanol, as a renewable source of energy, has been applied, almost exclusively, as a fuel for internal combustion engines to power vehicles.

For this application, it has to be attractive to the global automotive industry and to be competitive against other conventional and renewable fuels. Although, presently, it looks like ethanol has gained the status of global renewable fuel for spark ignition engines, there are several strong competitors to fulfill one of the global aims of the automotive industry, which is to reduce CO2 emission. Just to mention a few strategies, one can point out: the use of hybrid-electric vehicles powered by highly efficient diesel engines or direct injection gasoline engines; the application of second generation renewable fuels such as dimethyl ether or isobutanol; and the use of electric vehicles powered by batteries or fuel cells.

The past Brazilian experience with ethanol has shown that it is very difficult to break the century old development model that has been in place in the automotive industry on a global scale: to demand tighter specifications for gasoline and diesel while optimizing, respectively, spark and compression ignition engines and vehicles for those specifications. Only by using the customers demand for freedom of choice, each time they fill up their tanks, was it possible to launch the flex-fuel vehicles and to revitalize Proalcool.

To maintain the leading position of ethanol as the renewable alternative fuel to gasoline, one will have to keep it compatible with one of the principal technology pushers in power-train development, which is the compliance with future emission legislation. It is worth mentioning that the effort is directed mainly to gasoline, which represents more than 96% of all the fuel consumed by spark ignition engines in the world.

The research challenges to consolidate ethanol as the renewable substitute for gasoline are presented in two different time scales and technology bases. The first one, on a short to medium term (10 to 20 years), relates to the evolution of internal combustion engines. The other, on a long term, deals with fuel cells, Aviation fuels and applications.

The introduction of flex-fuel vehicles broke the paradigm of one specialized engine for one strictly specified fuel, as the vehicle has to be optimized for any ethanol and gasoline blends, thereby making the development issue a lot more complex. Only through an intensive use of on-board electronics has it been possible to tackle that problem and approach the development of “optimum” flex-fuel engines.

An “optimum” flex-fuel engine has to show the same performance, consumption, pollutant emissions and durability as the hypothetical engines that would have been optimized for each particular fuel blend on which the flex-fuel engine can run.

The short term technological challenges, demanding innovation, are how to adjust the actual engine compression ratio, perhaps by changing the closing angle of intake valves or using turbo-charging, and how to solve the cold-starting problem when using only ethanol.

The technological evolution of spark ignition engines will, probably, include direct fuel injection together with port injection and turbo-chargers, in order to decrease fuel consumption and CO2 emission. The challenge here is to understand the role ethanol can play in this new engine configuration, and to study its compatibility with the after-treatment devices that will be used for emissions control.

Plenty of research is being carried out at universities, research institutions and automotive industries on the homogeneous-charge-compression-ignition (HCCI) process that, when kept under control, promises to combine high thermal efficiency with low NOx emission. The single substance characteristics of ethanol can imply some application advantages under this process.

The ever increasing price of fuel is reinforcing the advantages Diesel-cycle engines have over Otto-cycle ones. To develop ethanol or sugarcane products with physical-chemical properties adequate for compression ignition engines is another important medium term technological challenge and Develop aviation fuels and applications.