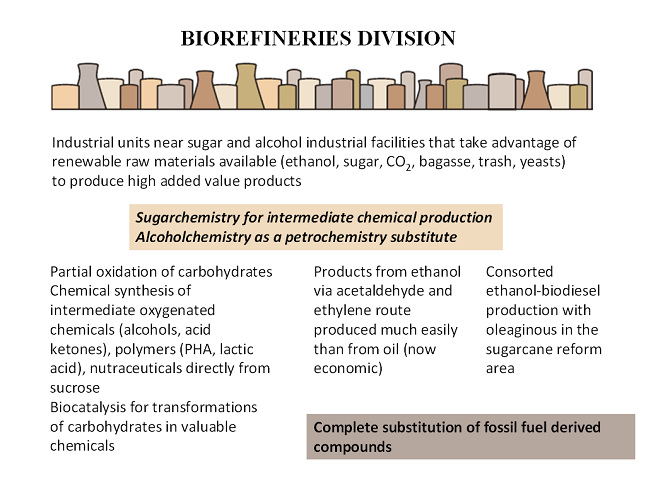 Bio-refinery consists of industrial units near sugar and alcohol industrial facilities that take advantage of renewable raw materials available (ethanol, sugar, CO2, bagasse, trash, yeasts among others) to produce high added value products. Bio-refineries benefit, also, from energy available from co-generation, as well as of the systems of residues reuse in the sugarcane farming. Bio-refinery technological opportunities include chemical derivates from sucrose (sugarchemistry); petrochemicals from ethanol and several other promising organic compounds like biodiesel, nutraceuticals and more.

Sugarchemistry is a promising route for the intermediate chemical production. Biochemical carbohydrates partial oxidation processes, together with the chemical synthesis for the production of intermediate oxygenated chemicals, such as alcohols and multi-functional organic acid ketones, are examples of this route that directly uses present sucrose in the sugarcane, without passing necessarily by the production of ethanol.

Biosynthetic processes like fermentation and enzyme catalyzed transformations of carbohydrates in valuable chemicals are clean routes.

Ethanol as a substitute in petrochemistry

With the knowledge acquired during the last century on the use of ethanol as raw material to obtain products normally produced from the oil substance allows the visualization of a very promising scenario for the use of the sugarcane biomass. It is worth to mention that the interruption in Brazil of alcohol-chemical processes probably occurred due to the relative high price of the products obtained through ethanol in comparison with the petrochemical via. The present scenario is different and the natural trend is the oil prices to reach higher values making economically viable other alternatives.

The advances in the reaction and separation engineering allowed the development of alternative process even more efficient that together with lower environmental impact make the use of bio-ethanol a very attractive via competing with petrochemical process even for unrealistic lower oil price.
The molecular structure of ethanol, an oxygenate product, suggests its use in more rational form as a raw material, instead of as only fuel, exactly because the production of intermediate oxygenates is difficult from the oil
There is a long list of products that can be obtained from ethanol with the following basic options: acetaldehyde route and ethylene route. The acetaldehyde can be gotten commercially by two processes: dehydrogenization and oxidation, both catalytic ones. In the case of ethylene production some processes can be identified such as the isothermal with fluidized bed reactor and the process in fixed bed reactor.
Other bio-products
The production of biodiesel is considered today, in Brazil, as one of the promising forms economically to make possible the production of a substitute of the diesel derived from the oil. The consortium ethanol-biodiesel production would be advantageous for the production of biodiesel in the agricultural aspect, for the production of the oleaginous (e.g. peanuts) in the sugarcane reform area. It could be interesting, from the industrial point of view, the use of ethanol produced for the transesterification of the vegetal oil (besides, off course, the use of the energy and available facilities). Biodiesel also could share commercialization logistic and be locally employed in sugarcane transportation and harvesting. Cake generated could be used to animal feeding.

Other examples of bio-products include:

• Derivatives of yeasts for humans and animal feeding (chelates and yeasts extract, besides high added values as specific amino acids);
• Microbial bio-degradable polymers (poly-3-hydroxybutiric acid, lactic acid, polilactic acid) for packing and medical use, produced from sucrose or from the derivatives of hydrolysis of bagasse and trash;
• Nutraceutical products, obtained by enzymatic route from sucrose presenting several advantages for the human health;
• Enzymes used in wide scale in the substitution of conventional processes of organic synthesis;
• Wax from sugarcane;
• Composites from cellulose.